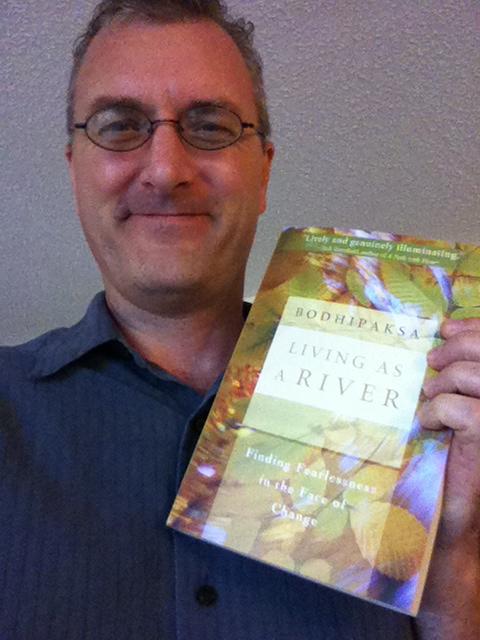 It’s a lovely thing to receive a “real” book after working so long with pixels and printouts.

Bodhipaksa was interviewed by Paul John Roach of “World Spirituality” on Unity.fm the other day, and talked about Living as a River.”

The program’s a little under an hour long and you can listen to the podcast here (MP3 link).

There’s an interesting post at Big Think about consciousness:

In his book “Consciousness Explained,” Tufts University philosopher Daniel Dennett calls human consciousness “just about the last surviving mystery,” explaining that a mystery is something that people don’t yet know how to think about. “We do not yet have all the answers to any of the questions of cosmology and particle physics, molecular genetics and evolutionary theory, but we do know how to think about them,” writes Dennett. “With consciousness, however, we are still in a terrible muddle. Consciousness stands alone today as a topic that often leaves even the most sophisticated thinkers tongue-tied and confused. And, as with all of the earlier mysteries, there are many who insist—and hope—that there will never be a demystification of consciousness.”

On a base level, consciousness is the fact of being awake and processing information. Doctors judge people conscious or not depending on their wakefulness and how they respond to external stimuli. But being conscious is also a neurological phenomenon, and it is part of what allows us to exist and understand ourselves in the world.

Dr. Antonio Damasio, a neuroscientist from the University of Southern California who has studied the neurological basis of consciousness for years, tells Big Think that being conscious is a “special quality of mind” that permits us to know both that we exist and that the things around us exist. He differentiates this from the way the mind is able to portray reality to itself merely by encoding sensory information. Rather, consciousness implies subjectivity—a sense of having a self that observes one’s own organism as separate from the world around that organism.

“Many species, many creatures on earth that are very likely to have a mind, but are very unlikely to have a consciousness in the sense that you and I have,” says Damasio. “That is a self that is very robust, that has many, many levels of organization, from simple to complex, and that functions as a sort of witness to what is going on in our organisms. That kind of process is very interesting because I believe that it is made out of the same cloth of mind, but it is an add-on, it was something that was specialized to create what we call the self.”

This sense of a gradation of mysteries, that I mentioned above, has a parallel in the Buddhist teaching of the five niyamas, a late Thervadin teaching of a gradation of levels of conditionality within existence — that is, a series of “laws” governing, or more properly, describing how things operate.

From the utu to the citta-niyamas, we see, through evolutionary processes, conscious beings arising. They are driven by suffering, which gives rise to craving and aversion as strategies to deal with that suffering.

In the karma-niyama, we see beings who are aware that craving and aversion cause suffering, and who realize that they have a choice. Self-aware beings are able to examine, reinvent, or rebuild their own consciousness by choosing which mental states they will develop and which they will refrain from reinforcing and allow to wither.

In the dharma-niyama we see a radical move away from the inner and outer actions that cause suffering: radical because we have started to let go of our clinging to the idea that we have a self.

This teaching of the niyamas doesn’t exactly explain any mysteries. And the Buddha wasn’t into doing that. He simply accepted that here we are, thrown into the world with minds predisposed to cause ourselves suffering, and then proceeded to show how we can eradicate that suffering. What consciousness is is still a mystery. Fortunately it’s being a mystery isn’t a hindrance to spiritual progress.