Extract from Chapter 8: The Earth Element

Where did this body begin, and was there anything at the beginning that I could call me or mine?

There’s no mention of conception in the traditional outlines of the practice, but since the body begins there, that’s where I tend to start my reflections. In my meditation practice I recollect that my life began with the fusion of an egg from my mother with a sperm from my father. I share with most people the reluctance to consider in any detail the conjugal activities of my parents, and so in this particular exercise of the imagination I find it useful to indulge in a little vague generality. So there is an egg and a sperm, floating, as it were, in the mid-air of my imagination. Sperm and eggs are of course delivery vehicles for your parents’ DNA. Not that it’s your parents’ DNA, not yours. In fact your parents’ DNA was not theirs either. They both got their DNA from their parents, and so on and so on back in time until the first common ancestor of all life. DNA perforce flows through time’s river, or it ceases to exist. Like everything else in the body, our DNA is not owned, but only borrowed. We can look at the provenance of DNA from another angle as well. The atoms that constitute your DNA are borrowed from the outside world. Your DNA is doubly other, coming from your parental lineage and from food ingested by your progenitors. 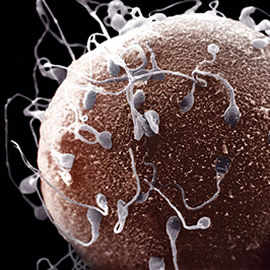 I reflect that neither the sperm nor the egg was me. One was clearly part of my mother’s body, while the other was likewise just one of the roughly 100 trillion cells constituting my father’s body at that moment in his life. Now, I can regard the product of the fusion of these two “not-me” cells as being, in some way, “me,” but the knowledge that the parts were not-me rather undermines the notion of their sum being “me.” Everything that made up that first “me” cell was borrowed. I have the sense, reflecting on this, of a disconcerting absence of “me” at the moment of my creation. I’d like to think that there was a “me” created, but considering that “I” was made from stuff that was entirely “not me” I experience the same dizzying sense of insubstantiality that arose in Chapter 1, when we considered the possibility of another sperm having met the mother’s egg.

Next I witness, in the mind’s eye, the growth and development of this single-celled, half-mother/half-father/not-me entity, in a series of mental snapshots and time-lapse movies taking me right up to the present day. In my reflections on the Earth element, I’m not concerned with visualizing the specifics of the entire process of embryogenesis—one doesn’t need a degree in embryology to reflect on it—but in a general sense I call to mind that the following process took place in my life: conception was followed by cell-division and the development of an embryo, which becomes a fetus, and then a baby. This growth was possible because of the borrowing of the Earth element from the outside world. The embryo at first got nutrition by absorbing secretions from the uterus, and dumped waste products into my mother’s uterine cavity, but later it grew by absorbing nutrition through the placenta. And what I absorbed from my mother was in turn what she had borrowed. The flesh and other products of animals, crops that have grown in fields, and fruits that have been cultivated in orchards were all funneled through my mother’s body to feed “me.” That which is other (food) flowed through that which is other (my mother) into the body, which—remembering that the embryo began as a cell from each of my parents—is also other. When we look closely, it seems that there is no “me” to be found in the Earth element constituting the developing embryo: “Now the internal Earth element and the external element are simply Earth element. And that should be seen as it actually is…”

We can visualize ourselves being born and growing to the point where we ingest food ourselves. Rather than being channeled through the mother’s body, food now flows directly into the body, being chewed, digested, and assimilated. We can imagine this process of growth, with its attendant flow and absorption of the Earth element, taking place right up to the present moment, right up to the form that is reading this book. In my meditation I picture this flow of the Earth element. I call to mind fields and animals, seeing the Earth element in the form of food flow from fields, along roads, into factories and stores, into my home, and into my body. The Earth element flows like a river, and I am just one eddy amongst its countless currents. This is another opportunity to experience humility and gratitude. How many countless people have been involved in growing, transporting, processing, and selling the food we have eaten over an entire lifetime? How many lives of plants and animals have helped sustain our small eddy? We can think of this and give thanks.

One Reply to “In the beginning…”